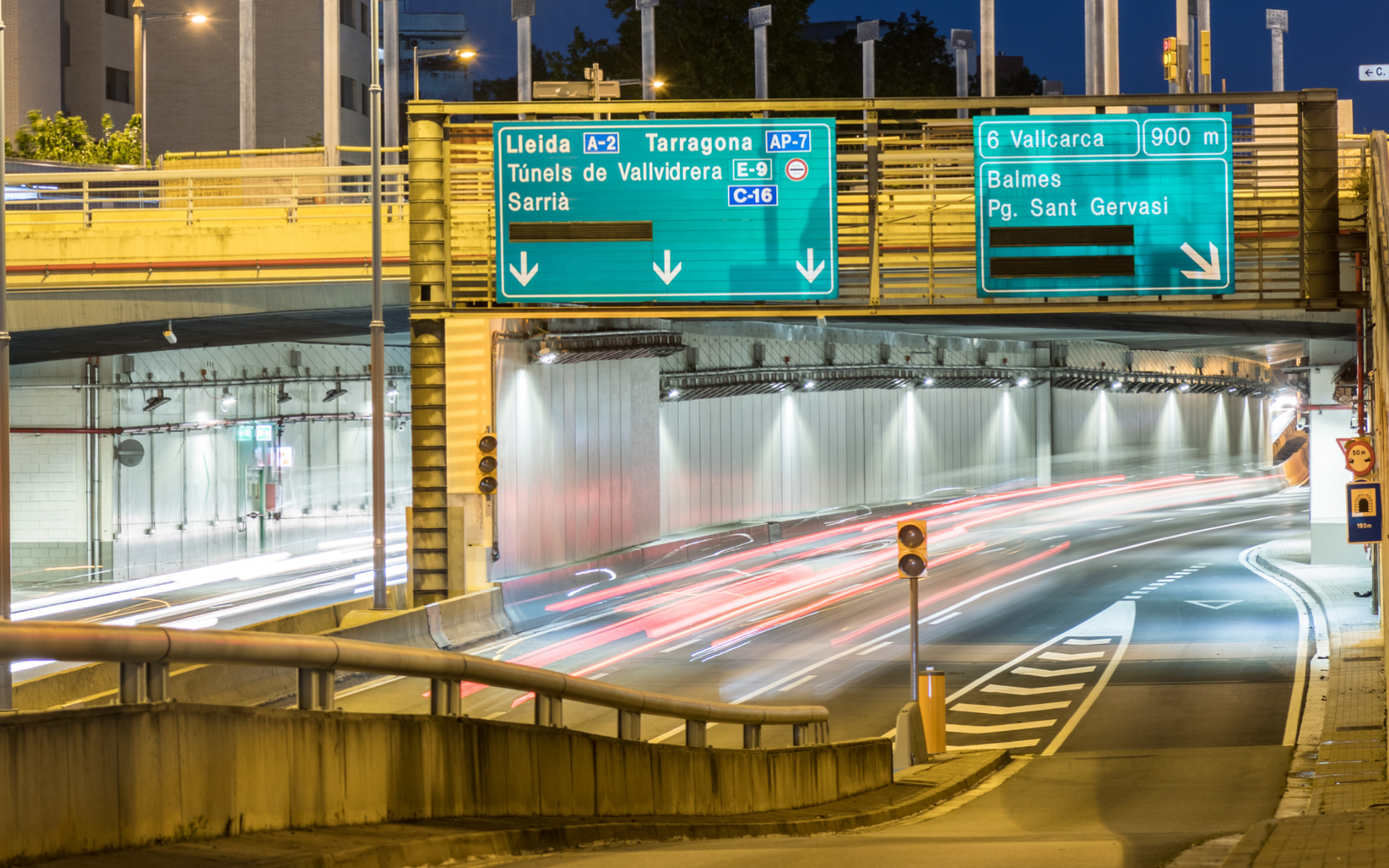 06 May CARANDINI CONTRIBUTES TO ILLUMINATE THE RONDAS DE BARCELONA

Posted at 07:59h in Uncategorized by admin

It all started more than thirty years ago, with an idea, to design a luminaire that would meet the tough working conditions found in tunnels. Carandini’s PHR was born just in time to illuminate the rounds of Barcelona. With it, and some other luminaires designed specifically for tunnels, it was possible to light the Barcelona ring road in the spirit of shining brightly for everyone in an Olympic Barcelona.

The lights used are still there, resisting the passage of time and the harsh working conditions that occur inside a tunnel; watching thousands of vehicles pass by every day safely, but no longer as efficiently.

With the advent of LED lighting, a new challenge arose, that of conceiving a luminaire to succeed the entire dynasty of luminaires that had successfully lit tunnels around the world. The design of the T-MAX began over 8 years ago; it had to be a robust luminaire while incorporating the latest technology to make it highly resilient and durable.

The Carandini T-MAX is specifically designed for tunnels, with a wide variety of luminous fluxes, light distributions and mounting options to respond successfully to the many different situations that occur in tunnels. Its performance was tested in different laboratories, but it was also evaluated in its real environment, a tunnel, using probes to ensure that all the key features for its operation were optimal. 2-module T-MAX installed inside the tunnel. Emergency exits from inside the tunnel.

From project to execution

As in all projects of this nature, the priority when it came to the lighting project was to dimension the installation to respond to the “worst case”. In that sense, the most adverse conditions that a user can suffer when passing through the tunnel must be taken into consideration.

These conditions are met with a wet floor and the sun shining at maximum intensity in the worst possible position. As you can imagine, these conditions are very unusual, and that is why from the technical office of Carandini, we call it the rainbow case, an entelechy that allows us to design for the most adverse conditions, but also those that occur rarely.

To light a newly created tunnel in the heart of the city of Barcelona, Carandini had to work hard to provide the installations with the required levels of luminance without neglecting the determining parameters when assessing the quality of the lighting in an installation. Some of these parameters are uniformity, both overall and longitudinal, and minimisation of glare, which can be a great risk for users when they pass through the tunnel.

One of the keys to the success of the project was the installation and commissioning of an intelligent lighting solution for the tunnel while there was traffic during the day. To achieve this, a large team of professionals was deployed by the construction company and other companies involved in the project. Part of the lighting was placed before the tunnel cover and the other part was placed after, when the walls and cover were completed.

Another challenge during the entire construction period was the circulation of vehicles during the day while the control system elements, as well as other electrical network components, were not yet in place. The work of the site management and the construction company was key to ensuring that users could pass through the tunnel safely, even though construction work was being carried out.

Finally, the dates for the installation’s start-up arrived; all the equipment was in place and wired according to Carandini’s instructions during the technical assistance sessions. In addition, in various sessions prior to commissioning, the operating conditions of the tunnel were parameterized.

During commissioning, the use of a carrier wave system and the precise installation work carried out ensured that the luminaires communicated correctly with the control gear, greatly reducing execution times because the luminaires had been identified beforehand. Thus, once the system came to life, the most important thing was to consolidate the data and ensure the correct operation of the system under all circumstances. Once this had been achieved, commissioning focused on testing the operating principles of the system, integrating data and optimising the control parameters of the luminaires.

An intelligent lighting solution is not like a luminaire, which is designed to remain unmoved by the passage of time. An intelligent lighting solution must remain alive, serving for that parameterization for which it was designed, but also interacting in real time on a daily basis with the rest of the elements that make up the ecosystem of the installation. To this end, several training sessions were held at different levels so that all the people involved in the maintenance of the installations had a clear understanding of the protocol for dealing with the most common operations. In addition, a complete documentation package was delivered that accurately describes all the elements and applications that achieve optimum system operation.

In this effort to keep the installation alive, Carandini is committed to providing continuous support for the installation of intelligent lighting solutions. This is why we continue to be in contact with the different entities involved in the project, adjusting the solution to cover all expectations and needs that may arise and to serve the personnel who operate with the tunnel on a daily basis to ensure that the passage of users is safe and efficient whatever the time of day. Installation of the luminaires with Carandini’s technical support.

Tunnel lighting projects are highly complex and require the work of a team of professionals who anticipate the various problems that may arise, as well as being involved in achieving the final objectives of the project, which are none other than the safe and efficient passage of users. At Carandini, we have been lighting up the lives of thousands of people for over 100 years and have undertaken major tunnel installation projects.

In our commitment to provide tunnel lighting installations with technology that optimizes energy consumption at all times, we have developed a specific solution for tunnels (ControLux Tunnel) that takes the operation of the installations one step further. With the latest version of this solution, adaptive lighting for tunnels is implemented, allowing the adjustment of lighting levels to the requirements of the exterior luminance meter, but also to the influx of vehicles or the state of the pavement.

The difficulties of providing adaptive lighting for a tunnel with a large influx of vehicles on Barcelona’s ring roads are unimaginable; even more so if the influx of traffic continues during the day. That is why Carandini’s experience has shone brightly to make solid progress in each of the project’s phases. In addition, the participation of companies with extensive experience and collaboration between the various professionals involved allowed the objectives to be achieved within the deadlines set.

Carandini, and the Controlux Tunnel solution, contributed its grain of sand by optimising installation times, as well as accompanying the different work teams involved in the project. Beyond the specific project, Carandini continues to improve the solution in its effort to ensure that the effectiveness of the system lasts over time, incorporating those key functionalities for the entities with which we work.

Great uniformity guaranteeing the safety of the vehicles. General view of the tunnel.

Lateral incorporation to the tunnel.

During the more than 100 years of its life, Carandini has successfully lit many other tunnels around the world. In countries such as Mexico, Peru, Chile, Colombia, Portugal, Morocco, France, Algeria, Greece, Bulgaria, Great Britain and Malaysia, the lighting solutions of the company, which is celebrating its centenary this year, are on display.

The reliability, technology and comfort provided by Carandini’s tunnel and infrastructure lighting solutions have made it an increasingly important player and an undisputed world reference in tunnel lighting.