Being in charge of the modernisation of the city of Marrakech has been a major project for Carandini, as it has implied a huge challenge and at the same time has produced great satisfaction, giving life to one of the imperial cities of North Africa. In addition to the size of the city, the particular layout of the city meant that in many cases work had to be done on site, analysing the various streets, avenues and areas in order to provide the best solution in each case.

The special sections of some of the streets, particularly those in the Medina area, where some have a width of about 2 m, together with the intention to preserve the architectural style of the area, led us to design luminaires specifically for the city. We had to adapt our V-MAX luminaire to give the optimum solution in this case, and the end result was great uniformity, with the luminaire being barely visible, achieving perfect integration within the area.

Another example is the lighting in the street markets, with low-rise roofs, where a suitable luminaire was also sought which did not alter the aesthetics of the street. V-MAX designed specifically for Marrakech mounted on a wall V-MAX design for Marrakech installed in a narrow street In the city there are luminaires that were installed many years ago and which are part of the history of Marrakech. In this case, specific Retrofits were designed to incorporate these representative luminaires, upgrading them to LED technology and carrying out their cleaning and restoration. Luminaires and column on one of the main avenues in the city with Retrofit incorporated.

Marrakech is a city with a great nightlife, and for that reason special care was taken in the lighting of areas where nocturnal activity is commonplace, while ensuring that lighting levels are not too high and are a disturbance for other residential areas. Road illuminated with the Urbalite luminaire for highway applications Pedestrian street in the city centre illuminated with Retrofits The luminaires installed throughout the city were been V-MAX, HFL, Urbalite and Retrofit, thanks to which great lighting results were obtained, and the upgrade to LED technology has brought great change to the city and to people’s lives. LED luminaire with a unique design of expandable lumen packs that optimise luminaire performance, lifetime, thermal performance and aesthetic value by allowing light to be directed with excellent efficiency into the street. 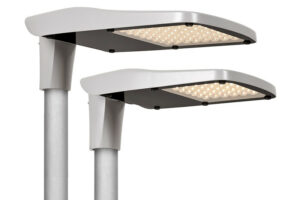 A road luminaire with modern and simple lines that adapts perfectly to urban spaces, providing uniform and efficient lighting.